In Pennsylvania, the term “divorce” means a divorce from the bonds of matrimony.  Simply put, a divorce is a legal end to the marriage when the Court issues a decree in divorce.  On the other hand, a married couple can choose to live “separate and apart”.  This means that there is an end to cohabitation, but the couple continues to be married to one another.  In Pennsylvania, there is no legal “separation”.  In other words, there is no formal process or court order required to be considered “separated” in Pennsylvania.

WHAT DOES IT MEAN TO LIVE “SEPARATE AND APART”?

Under Section 3103 of the Pennsylvania Divorce Code, the term “separate and apart” means a cessation of cohabitation, whether living in the same residence or not.  While it seems counterintuitive that a married couple can live separate and apart in the same home, it is quite common.  Often, one spouse is unable to get the courage to leave the home or to force the other spouse out of the home.  Or, it may be financially difficult for each spouse to maintain separate households.  Nevertheless, the couple may continue living separate and apart in the same home if it is established that they maintain separate bedrooms, meals are eaten apart from one another, entertaining as a couple is no longer occurring, and sexual relations have ended.  This concept arose from a Pennsylvania Superior Court decision in 1984 in which the court held that “living in quarters separated physically and without sharing the incidence and attributes customarily attached to the marital relationship” are enough to constitute grounds for divorce.

No one factor is conclusive.  What is important is the existence of “separate lives” and not “separate roofs”.  If the parties engage in sexual relations, this does not by itself indicate that the parties resumed the marital relationship.

WHAT ARE THE ADVANTAGES OF LIVING “SEPARATE AND APART”?

Oftentimes, couples do not want to proceed with a divorce because they believe that separating will give them time to reflect on the marriage.  Many people believe that the time apart will allow them to decide if they really want to be with their spouse and to allow for a chance at reconciliation. There may be financial benefits too.  For example, married but separated spouses are still married so they can retain the medical benefits that they have. There may be tax advantages and social security benefits too.  Some people may have religious beliefs that prohibit divorce.  These people can start a new life with a separation, but they are not sacrificing their religious beliefs in order to do so.  Military spouses might also be able to maintain military benefits.

WHAT IS A SEPARATION AGREEMENT? 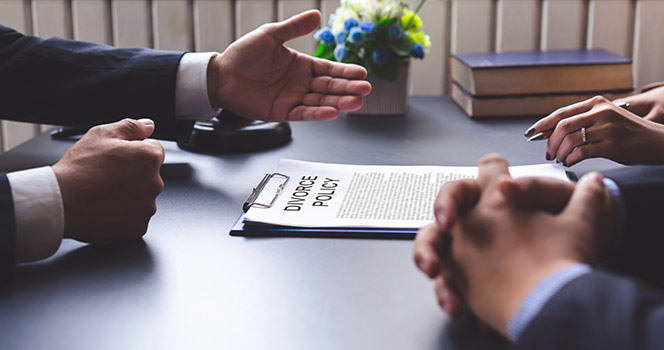 IS SEPARATION RELEVANT TO A DIVORCE PROCEEDING?

In order to receive a decree in divorce from the Court, there must be “grounds for divorce”.  Living separate and apart is a necessary element of a unilateral no fault divorce under Section 3301(d) of the Pennsylvania Divorce Code.  In these cases, the spouse who wants the divorce must file a divorce complaint and he or she must allege an “irretrievable breakdown” of the marriage.  When the spouse can prove that the parties have continuously lived separate and apart for at least one-year, the Court may grant the decree in divorce even without the consent of the other spouse.

If a spouse files a divorce complaint and alleges an irretrievable breakdown of the marriage under Pennsylvania law, that spouse can allege the parties have lived separate and apart since a specific date.  If the other spouse does not believe that the marriage is irretrievably broken or if he or she does not believe the parties have lived separate and apart, then the spouse can file a counter-affidavit.  When a counter-affidavit is filed, the matter will be decided by the Court after an evidentiary hearing.  The spouses should each have an experienced divorce lawyer present their case.

If you are married and you are considering a divorce or a separation, you should consult with a divorce lawyer before taking any steps.  You must understand your legal rights so that you take the right steps.  Please contact The Martin Law Firm, P.C. today for a free case evaluation.  Our number is 215-646-3980.